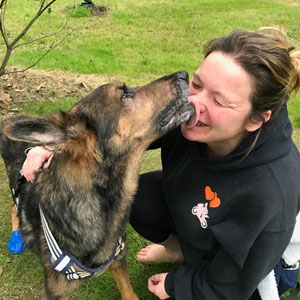 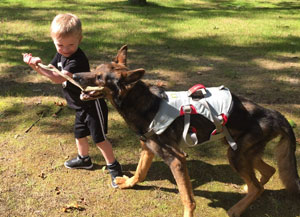 Fletcher and his boy KaidenWhen Fletcher became a Monkey's House dog he was broken in every sense of the word—covered in urine, feces, and fleas, unable to stand or walk, emaciated, and with cancer throughout his body. His condition told a story of a long time of neglect.

This beautiful German shepherd was placed in a loving foster family. Aunt Holly, Tom, and Kaiden were his people. It took Fletcher just a few days to realize he was safe with his new family that adored him. For the first time in his life, he experienced what love really felt like.

We quickly put Fletcher on a food therapy program and had a special harness to help him up and move about. Within a week he was walking on his own with Holly by his side step for step. In just a week, the difference was incredible!

Fletcher very quickly bonded with Kaiden, who was three years old at the time. You could find them playing in the yard together with a ball or a big stick. It was as if Fletcher had found his little boy.

The time with this great soul was too short by our standards, but we were grateful that Fletcher had those three months with his family and Kaiden. It was just long enough for him to experience the kindness he’d been deprived of all his previous life before he came to Monkey’s House.